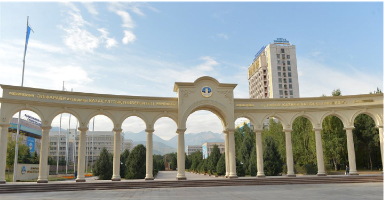 In April 2014, the University of Tsukuba Almaty Office was established at the Al-Farabi Kazakh National University in the city of Almaty, Kazakhstan. Together with the Tashkent Office in the Central Asian region, the mission of the Almaty Office is to promote research in the fields of Japanese language education, Central Asian Studies, and other interdisciplinary areas, to support the publication and dissemination of scholarly articles, and to organize international conferences, symposia, as well as cultural events in both Japan and Kazakhstan.

Greeting from The Director

In Central Asia, there are five countries and Kazakhstan is the largest. It is a country with both magnificent nature and culture. For those who are interested in old history, ancient cities abound in the mountains and deserts. For those who are interested in space, the Baikonur Cosmodrome, the world’s largest space launch facility, is also located in Kazakhstan. The late KUROKAWA Kisho, one of Japan’s most famous architects, designed the new capital of Kazakhstan. When you visit this country, you will feel a sense of nostalgia and warmth from the people, as well as with the food culture of “Lagman,” which is known as “Kazakhstan’s Kishimen,” and “Beshpalmak,” which is served with horse meat.  You cannot help but sense that it’s a country that has some affinity to Japan.

After the dissolution of the Soviet Union in 1991, five independent states (Uzbekistan, Kazakhstan, Kyrgyz, Tajikistan, and Turkmenistan) were established in the Central Asian region. Thirty years have passed since then, and research on Central Asia is becoming increasingly active in Japan and other parts of the world in various fields, regardless of humanities or sciences, and the region is an important link between Europe and Asia.

The Almaty office will continue to do its utmost to promote the exchange of students and researchers as well as joint academic projects in the fields of humanities and social sciences, such as Japanese Studies and Central Asian Area Studies, as well as in the fields of medicine, systems informatics, and life and environmental sciences, all of which are distinctive academic fields of the University of Tsukuba.