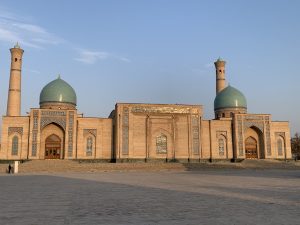 Greeting from The Director

What comes to your mind when you hear the word “Central Asia”? Some people may visualize the magnificent nature, others perhaps, architecture, art, and music with its storied history. Uzbekistan, which developed as a critical point along the Silk Road, is dotted with UNESCO World Heritage sites. The blue Samarkand, the brown Bukhara, and the holy city of Khiva are ancient cities full of charms that you should visit at least once in your life.

With the collapse of the Soviet Union in 1991, five independent states (Uzbekistan, Kazakhstan, Kyrgyz, Tajikistan, and Turkmenistan) were created in the Central Asian region. Thirty years have passed since then, and research on Central Asia is becoming increasingly active in Japan and other parts of the world in various fields, regardless of humanities or sciences.

The Tashkent office will continue to do its utmost to promote student and researcher exchanges and joint academic projects. It seeks to do so in the humanities and social sciences, such as Japanese Studies, Japanese Language Education and Research, and Central Asian Area Studies, and in life and environmental sciences and other unique academic fields at the University of Tsukuba.