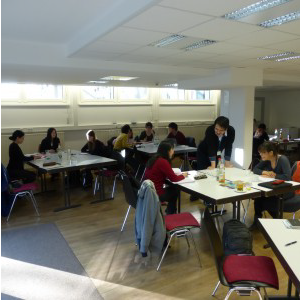 The 7th Japanese-German Interpreter Training Seminar was held in Ludwigshafen on February 24-26, 2018. Organized by the University of Tsukuba Bonn Office since 2011, the training seminar provides a platform for diligent study by facilitating the networking of Japanese-German Interpreters as well as those who are interested in interpreting. For the past two years, the event has been supported by the Japanese Culture Institute in Cologne (The Japan Foundation).

The 25 participants ranged from freelance Japanese-German interpreters, lecturers of the Master’s Course in Japanese, German and English Interpretation at the University of Heidelberg, to staff of the Japanese Embassy of Germany, Ministry of Foreign Affairs, Japanese-German Center Berlin, and also including students aiming to become interpreters. The participants practiced consecutive interpretation of speeches with “the decreasing birthrate and aging of the population” as the main topic apart from conducting voluntary speeches among themselves. They also engaged in the interpretation of a debate between Prof. Dr. Aizawa of the Bonn Office and Dr. Asa-Bettine Wuthenow, lecturer of the University of Heidelberg’s Japanology Research Institute.The seminar aimed not only to train interpreters but also to deepen appreciation for the duties and teamwork of interpreters, by promoting constructive mutual feedback regarding the interpreting performance of the participants. Moreover, it enabled networking among interpreters in Germany, while also contributing largely to the mutual understanding of Japanese-German interpreters and the further exchange of diplomacy, culture, and skills between Japan and Germany.